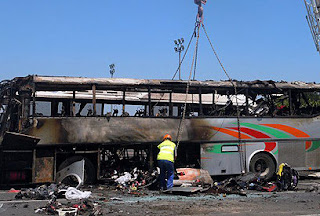 Excuse me if you have forgotten it already: The day before James Holmes burst through an emergency exit at the Aurora Century 16 multiplex to gun down twelve people and wound fifty-eight others attending a midnight screening of The Dark Knight Rises, another man had stepped onto a bus in Burgas and promptly exploded, taking the lives of five Israeli passengers vacationing in the popular tourist spot and the driver. The day before that, however, a suicide-murderer in Damascus lit himself up at the expense of Dawoud Rajiha, the defense minister of Syria, and his deputy, who also happened to be the brother-in-law of Bashar al-Assad, the apparent primary target.
Mankind, in sum, has had a hell of a week, but if all that had happened was the Damascus attack, one would have never known it from the reactions of those to whom those two extinguished lives and the third who was sadly missed were but insufferable and oppressive butchers. The American condemnation of the Burgas massacre was swift, and issued from the highest authority, with all the vehemence and potency of the executive branch; the measurably awkward task of releasing a statement on the earlier bombing, however, was quietly outsourced to the Secretary of Defense, who shed no tears in rightly condemning the Syrian despot for letting it culminate in this. Then, of course, we suffered a terrorist attack of our own.
At 11:59 P.M. on July 19, Holmes was fulfilling a distinctly American fantasy. Here was a highly intelligent and highly educated upper middle class former summer camp counselor with no prior criminal record, a good ol’ (if socially inept) boy by all accounts, who was also unexpectedly indulging in and treating himself to the guarantees and ostensible pleasures of the Second Amendment. Before those first shots, had the mandate of the National Rifle Association ever been so vindicated? As the projectionist in the movie theater started the show, the murderer stalking just outside was still the sort of upstanding member of the community that the N.R.A. had been in the business of cultivating and defending. How dare radical anti-gun activists attempt to take away the constitutional rights of James Eagan Holmes, Ph.D?
And when the weaponized smoke (also legally obtained) cleared, how quickly were we made to watch the right-wing succor the psychopath of Colorado! Louie Gohmert, the extremely loud and incredibly mediocre representative from Georgia, was the first to capitalize on the fun, and the disgraced former state senator Russell Pearce, of racist Arizonan immigration lawmaking infamy, shortly followed suit. No, they dully warned, irrespective of the fact that Holmes owned four firearms – three of which made it into the screening – the problem was that, thank you, but there weren’t enough guns. Is this not the ugly consummation of yet another N.R.A. wet-dream? Consider that these two Republicans received their wish, and some intrepid soul had the presence of mind to draw a six-shooter and stop all the carnage. It is the excipient of N.R.A. ideological force that this hypothetical swashbuckling cowboy be not only a perfect shot in the dark, but to also have the paranormal vision of one able to both see through smoke – Holmes, firing indiscriminately into the void, was not encumbered by this disadvantage – and to then pinpoint the few fleshy chinks in otherwise completely enveloping anti-ballistic body-armor (also legally obtained). It is not so hard to imagine the terrorist wishing someone had had the apparent testicular fortitude of Gohmert or Pearce just to double-down on the amount of discharged ammunition, the chaos, and the body count; and who, then, to indict, when the police arrive to identify the good shooter from the bad? There have already been reports of a half-remembered accomplice streaming out of the chimeric darkness.
To return now to the twin suicide-murders that preceded this. The amazing proliferation of bin Ladenism and its organized cult of nihilistic death-worship is largely thanks to its success in exploiting the anxiety of uneducated and impoverished young men toward the prideful and wealthy people they’ve been taught are holding the purse strings. How is this powerful recruitment tool any different than the election of a wealthy black Harvard professor who is also socialist and Kenyan and communist and fascist, etc., to the presidency and to lord over our own cadres of uneducated and impoverished? In the week after that monumental election, a gun salesman told a CNN reporter that he’d never seen business so good (horrifyingly, the AR-15, Holmes’ weapon of choice, appeared to be among the most popular). The N.R.A., through its executive vice president Wayne LaPierre and his mouthpiece on The Glenn Beck Show, spent the proceeding years of the presidency promising frightened white people that Obama was coming for their guns, when in reality, he has increased access to them, including in national parks; likewise, Bin Laden and al-Zawahari were able to conscript frightened Afghans with promises of a vertiginous paradise in the hereafter when in reality, they would simply disintegrate.
The legacy of N.R.A.’s advocacy is to have convinced the country that no gun owner has ever had a mental illness, and that everyone can be a hero. In order to entertain the ideas of the N.R.A., one must also tolerate the occasional toddler who finds his father’s “hunting” rifle and shoots his own face off, as has just happened in Denver. Does that not sound like the charter of Hamas or Hezbollah? The murderer in Aurora, like the bomber in Damascus but a little wealthier and better educated, is then “our kind of terrorist” – it’s simply a shame about all of the victims! The intellectual model for the National Rifle Association is not the United States Constitution or the Bill of Rights. It’s al-Qaeda.