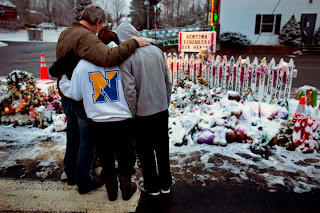 We can now predict the time and place when our latest gun tragedy can finally recede into arbitrariness. After the Aurora massacre last summer, that time was when Wayne LaPierre and his paid-for thugs in the House of Representatives went to the airwaves to offer not the solace of consolation for their advocacy of firearms access but the solution to it, which happened to be an extension of that very same advocacy. The executive vice-president of the National Rifle Association came to and then insisted upon the amazing conclusion that what the theater had lacked that bloody morning was more shots fired into the smoky darkness, preferably by a gunslinger with superlative aim – the better to fire around the hundred or so bodies fleeing for the exit at the exact time – and the reflexive charisma to convince arriving law enforcement that he hadn’t been in league with the original shooter. Of course, when the lights come on and the weaponized smoke finally dissipates, how is the hero supposed to know he hadn’t been unwittingly conscripted by the murderer anyway? I imagine that question lingering just long enough for the sheriff’s department to complete its ballistics examinations, and only then would James Holmes have known whether his fulfillment of Joker-inspired chaos had achieved homicidal feedback.

The day of that shooting, I managed to sustain a pointless debate on Twitter with an unexceptional Second Amendmentist who’d found my name listed on Michelle Malkin’s tweet aggregation website complaining mildly about the N.R.A.’s influence on modern politics. My virtual accoster insisted I view security camera footage of an elderly man protecting a LAN cafe in Ocala from a pair of gangsters intent on separating its customers from their valuables. The video is astonishing for what it shows: the man, Samuel Williams, approaches the criminals with a Zen-like air, his arm extended almost involuntarily as he readies the shots which had excited the tweeter so much. The action is so calm, and over-with so quickly, that one imagines the man thinking nothing of sitting back to his terminal once the rats have fallen over themselves (literally! it’s quite comical) in trying to escape. But the clip is also astonishing for another reason. We are a nation that by some liberal estimates has more guns than citizens, and of which many, especially after the supposedly historic election of our first black president, are of actual military provenance. It did not seem to concern my cowboy friend that after that much proliferation he was able to locate just a single video in which they were used for good.

After the unsuccessful assassination of Congressman Gabrielle Giffords in Tucson, at least one witness came forward to admit that he had been packing heat but had stayed his trigger finger for the exact reasons I listed above (and in my previous essay on the Dark Knight murders), but also pointed out that the firing was over so soon that he had not even had time to identify the correct shooter. Jared Loughner’s massacre was finally halted when he paused to exchange magazines, meaning that his original discharge had lasted roughly fifteen seconds, the minimum amount of time the magazine he used would need to expel all of its bullets. This also coincided with just the amount of time he needed to kill six people, including the nine-year-old Christina Taylor-Green, and injure the sixteen others, including the congresswoman. LaPierre and the N.R.A. were so unmoved that they were actually able to express genuine perplexion that anyone might call for a ban on Loughner’s extreme firepower, and they could be seen, even a month later, inveighing against it.

In Ian Kershaw’s The End, his perfectly-titled and redoubtable chronicle of the Third Reich’s last year and the resounding death throes it produced in permitting countless Germans to be subjected to a prolonged slaughter by its enemies, I was struck by the salience of Goebbels’ relentless propaganda even as the internal minister himself became aware of the hopeless situation he presided over. Men of “fighting age” but without combat experience were transported to the front lines and expected to turn back Allied advances on either border, with little but the assurance from above that the if only they applied themselves fully to the battlefield then the Reich could be preserved long enough to employ the “miracle weapons” being developed just around the corner. Kershaw illustrates the great fairmindedness of Hitler’s domestic victims in resisting much of Goebbels’ myth-making, but not all were unswayed, and there were still many Volkssturm at the Reich’s last months who expressed a national duty to give their lives for Hitler’s dark ambition.

Listening to Wayne LaPierre’s remarks after the Sandy Hook Elementary School massacre, I hope I can be forgiven for being reminded of the industrial effectiveness of that wartime propaganda. He was unable to explain why even law-abiding gun owners should need the same semiautomatic rifles employed on battlefields, but reserved a great deal of invective for a number of video games and movies that have never actually killed anybody. (This is a seductive narrative – I played the Donkey Kong Country series so much as a child that I can no longer stomach the thought of eating bananas.) His suggestion was to place a gun in the hands of every school official and hope for the best, which was obviously successful enough at Columbine (with two armed guards  in-house), Virginia Tech (which maintained a SWAT team on campus), and Fort Hood (a military base). He made a reptilian distinction between shooter and hero, saying that “the only thing that stops a bad guy with a gun is a good guy with a gun”, perhaps believing his own fantasy about the Aurora movie theater or the Tucson political rally. More men to the front, please. The war must go on.

But don’t all “bad guys with guns” begin as “good guys with guns”? One cannot even be a “bad guy” and still purchase a firearm legally. Dylan Klebold went to prom, riding in a limousine with a date and her friends, on the weekend before he helped Eric Harris gun down their classmates. Harris himself was at least likable if not somewhat popular, which the journalist Dave Cullen and author of the most important book on the shooting ascribes to a latent sociopathy that enabled the killer to project a fallacious personality even as his plunged into demented nightmares from the solace of his bedroom. Nidal Hasan, the Fort Hood murderer, was an Army psychiatrist before Anwar al-Awlaki seduced him into firing against his own comrades. Hasan’s name might be properly written with a “MD” affixed the end, and had James Holmes completed his neuroscience education at the University of Colorado, he would have earned a “PhD.” Prior to his massacre, the National Rifle Association should have been elated to know of his existence. How many PhD candidates do you know who own AR-15s?

Enough Republican lawmakers have profited off of legislating to this reductive fatalism that those who oppose the Second Amendment right have had to take the matters of resistance into their own hands. The Westchester Journal News courageously posted the names and addresses of its neighboring gun owners, and has insisted on continuing publication even after the expected objection. And why not? We already have an accessible national database of similar consequence for child molesters, the better to preserve the safety of one’s sons or daughters and insulate them from even the potential of predation. I will be persuaded by the story in the Washington Post of a 73-year-old woman and gun owner complaining about her having been equated with sex offenders when I can confirm that she has no grandchildren. There are plenty of children of “good guys” (and “gals”) who are still too half-grown to even know the difference between good and bad, and many have encountered a piece of the N.R.A.’s legislative might and succeeded in committing self-assassination. Adam Lanza was one such child, and it did not matter whether his mother was good or bad even as he shot her in the head, with her own weapons.

I count myself among those of us who would not be happy until the Second Amendment is good and repealed, but if we are not allowed to ban guns, then what’s the harm in knowing about the hidden danger in our neighborhood, so we can choose whether to live there? Plenty of felons’-rights advocates have succeeded in making it unreasonable to worry that all sex offenders are itching to reoffend, but why take the risk? I can think of no better illustration of this threat than one blogger’s response to the Journal News’ scarlet-lettering. He thought it appropriate to post the journalists’ own addresses in retaliation, as if a contingent of notebook-wielding writers for a small paper might be as feared as owners of multiple semiautomatic rifles. If only the Fourth Estate actually posed such a threat! No journalist’s child has ever killed himself or others after discovering the tools of that trade, but now they can be expected to fear defending themselves against the tools of another.